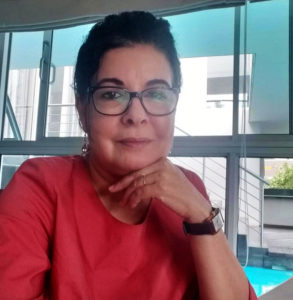 Asma Lamrabet is considered as a third-way feminist who revises sacred Islamic texts, believing that the interpretations that underlie Islamic Law from the 9th century were excessively patriarchal and must be reinterpreted. She is a Medical Doctor and biologist at the Avicennes Public Hospital in Rabat. She was the Director of the Center for Women’s Studies in Islam of the Rabita Mohammadia des Oulémas au Maroc (The Mohammadia of Moroccan Scholars) from 2011 to March 2018. She worked as a volunteer doctor in Spain and Latin America. Mainly she worked in Chile and Mexico for eight years starting in 1995. From 2004 until 2007, she returned to Morocco, where she organized an initiative that created a group of Muslim women interested in researching and reflecting upon Islam and intercultural dialog. In 2008, she became President and a board member of the International Group for Studies and Reflection on Women and Islam (GIERFI), based in Barcelona. She led the initiative to create a new female Muslim consciousness. Throughout this period, she continued working as a physician, specializing in blood disorders at the Rabat Children’s Hospital. In 2011 she became the Director of the Center for the Studies and Research Center on Women’s Issues in Islam of the Rabita Mohammadia des Oulémas under the patronage of His Majesty the King Mohammad VI.

She published English and French articles that explore issues such as interfaith marriage and religious reform in a Muslim context. She is the author of several books, one of them “Women and men in the Qur’an” Palgrave Macmillan Publisher, received the Social Sciences Awards 2013 by the Arab Woman Organization.